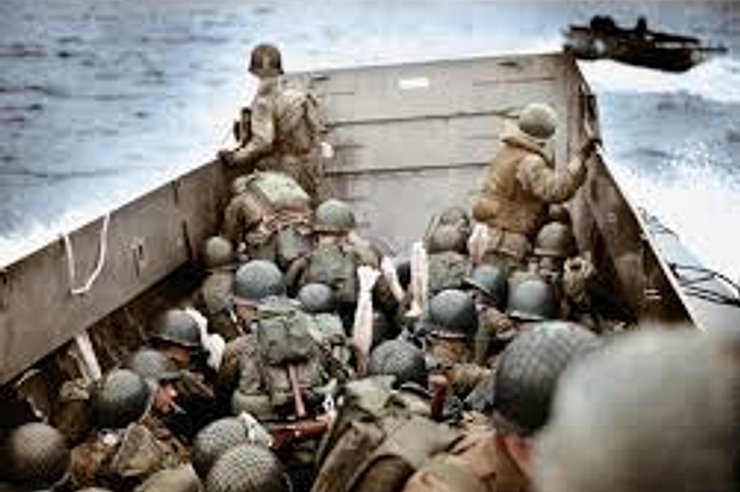 Ste Mere Eglise. Considered to be the first town liberated in France on the 6th June and also depicted in the film the Longest Day. This strategic crossroads town was heavily fought over and defended by the American 82nd US Airborne Division. Hear the stories of the men involved including John Steele who got caught on the town steeple and visit the church and infamous market square.

La Fiere. To the west of Ste Mere Eglise was the battle for the bridge over the Merderet river. Depicted iin the film Saving Private Ryan. This battle to defend a tiny bridge, with a connecting causeway, by elements of the 82nd Airborne Division, is now considered to be one of the highest casualty rated, small scale action of the American Army in WWII. Hear firstly the incredible stories of bravery in defending the bridge and the immense sacrifices of them trying to advance over it.

Cauqiney. Visit the area to the west of the Merderet river where First Class Charles Deglopper sacrificed himself for the survival of his comrades. This selfless act was to lead to the only Medal of Honour to be awarded to the 82nd Airborne Division during its involvement in the Normandy campaign.

Bocage Hedgerows. Visit the hedgerow countryside that made the fighting so difficult for the Americans in Normandy. Hear about the problems they created and the solutions that eventually lead to the US breakout into the open countryside beyond.

Utah Beach. The site of the first Allied beach landings on D-Day. Here we will start to understand the chaos of war and how American leadership and the GIs initiative would overcome it. Visit German bunkers and pay homage to the monuments of the 4th Infantry Division and its attached units.

Angoville au Plain. Stop at this small village with a big story. The tiny church was used as a first aid post treating more than 80 wounded. Hear about the bravery and commitment of the 2 medics from the 501st Parachute Infantry Regiment, 101st Airborne Division. See the monuments and stained glass windows that honour the men and events of 1944.

St Come du Mont. This small village was a key objective for the 101st Airborne Division on D-Day. The village was the scene of much scattered fighting but the village will long be remembered for the story of Sgt Joseph Beyrle who’s amazing account leads from Normandy to Russia.

Graignes. Many American Paratroopers on D-Day were dropped in error, miles away from their designated Drop Zones. None were dropped further than the men, predominately from the 507th Parachute Infantry, 82nd Airborne Division, who landed around the small village of Graignes. Hear about the combined bravery of soldiers and French civilians as they battled against elements of the 17th SS Panzer Grenadier Division.

Omaha Beach, Dog Green Sector. Here we will visit Dog Green Sector of Omaha beach, depicted iin the film Saving Private Ryan. Th scene of the heaviest casualties on any beach sector, on any beach on D-Day. There is no other stop on this tour where we will better understand the importance of ground in battle. Hear about the young men of the 29th Infantry Division who landed, what they suffer and how they finally overcame the German defences.

Omaha Beach, Fox Green Sector. Now up on the bluff at German resistance nest 62, we ca fully understand the ease at which the Germans were able to sustain the battle for as long as hey did. Hear about the Omaha Invasion from the German perspective. Visit the last German bunkers to fall to the Americans on D-Day.

The Normandy American Cemetery. Words cannot do justice to the setting, beauty and significance of this site. The final resting place of 9387 American servicemen and women from the Normandy campaign. Used as a location for filming Saving Private Ryan and overlooking Omaha beach.

WN German Strongpoint 60. Nowhere on Omaha beach will you get a better understanding of the ground, than visiting this German strongpoint. Overlooking Red Fox Sector, this was the eastern flank of Omaha beach on D-Day and an area that was bitterly contested and would lead to the award of the Medal of Honour. Hear the stories, visit the bunkers and stand in awe at the view.

Le Ruquet, Exit E1. This cutting throught he bluff, overlooking Omaha beach was the first exit cleared on D-Day. It was the scene of bitter fighting with several different groups of Americans attacking from all angles, that would lead to the German collapse and the opportunity of pushing armour into the attack. Fantastic stories of heroism.

Point du Hoc. One of the baldest assaults of the Second World War. Listen to the stories of the men from the 2nd US Rangers Battalion who scaled up the 100 ft cliffs to assault the strongly defended German strongpoint in an attempt to knock out a powerful gun battery position. Visit the bunkers and see the amazing craters caused by the allied bombing.

Grandcamp Maisey. It’s not very often that one soldier has the skill, aggression and determination to take out a complete German Strongpoint on his own, but on the 8th of June, just outside this small fishing town, that’s exactly what happened. See the ground he advanced over that would lead to the award of the Medal of Honour.

La Cambe German Cemetery. Visit the site of the largest German Cemetery in Normandy. Containing the bodies of more than 21,500 men and see the contrast from the US Cemetery. A moving stop that ends the day pondering our past enemy.