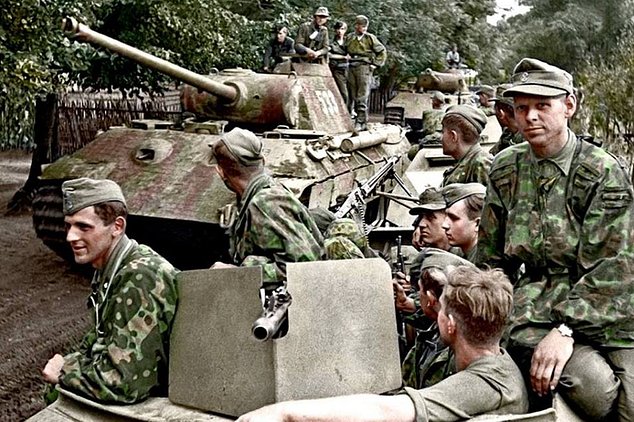 Cintheaux
It is in the area to the north of Cintheaux that we will see and understand the ground that is the centre of the the Allied attack during the commencement of operation Totalize, that leads into operation tractable. Visit the location where the most famous German Tank ace of WW2, Hauptsturmfurher Michael Wittman, would meet his fate.

Bretteville Sur Laize Commonwealth war graves cemetery
Here we will see the final resting place of over 2800 Canadian and British soldiers. This lesser visited cemetery lies within the grounds that would be the heart, of the battle of Operation Totalize.

Grainville-Langannerie Polish war cemetery
As will be seen on this tour, the incredible contribution of the 1st Polish armored Division in the latter stages of the battle of Normandy were incredible and so a short visit to pay homage to these brave young men should not be missed.

Falaise
The medieval town of Falaise was mostly destroyed in 1944 but it’s still possible to match WW2 photos to today’s locations. We will also hear about the fanatical resistance of the school of Saint Jean, by elements of the 12th SS, Hitler youth Division.

Lunch
We normally purchase a picnic lunch in Falaise and make a stop within the Falaise pocket to eat.

Saint Lambert Sur Dives
This tiny village would be the site of one of the most outstanding actions of the Canadian forces during the Normandy campaign and which would lead to the award of the Victorious Cross, to Captain David Currie of the South Alberta Regiment.

Moissy Ford
One of the major crossing  points for the retreating German army over the river Dive, this relatively unchanged location became a choke point of human chaos and suffering.

Chambois
This castled town, would be see the link up between the 90th US infantry Division and the 1st Polish armored Division. Just outside of the town would see the action and later award of the Medal of Honor to Technical Sergeant John “Budd” Hawk.

Hill 262 “The Mace”
If ever there was a location that allows for the understanding of a battle, it’s Hill 262. Standing on this high ground on a clear day, allows you to capture the enormity of the events that were unfolding here in late august of 1944 and was the scene of some of the bitterest fighting of the battle. (Several stops along the ridge.)

Coudehard
Whilst there is much debate amongst historians in relation to the sealing and containment of the Germans in the Falaise pocket, less is discussed about the remnants of two German SS Panzer Divisions breaking back into the pocket and allowing for additional German forces to escape. The tiny village of Coudehard is the location where these events unfolded.

Grey castle
One of the smaller sites visited during this tour, it gives us an insight into the brutality of the fighting and the heroism of the Polish soldiers defending this small French Manor house.

Virmoutieres
From Hill 262 we will follow the main route that the fleeing German forces would take upon having escaped the Falaise pocket, with many of them passing through the town of Virmoutieres. Here we will visit the remains of the only German Tiger Tank still within the region of Normandy and retrieved from the pocket.