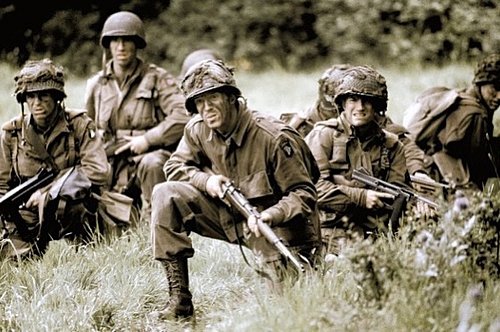 During my time guiding I have met more than 20 of the original men of Easy Company and have managed to ask many questions which have helped me piece together a better understanding of the men and their actions in Normandy.

Ste Mere Eglise. This small French market town is made famous by being considered to be the first town liberated on D-Day but also because of the scenes in the film the Longest Day. Most people visiting would not be aware that many of the young men from E/506th (Band of Brothers Company) also landed in and around the town. It is therefore the perfect place to start the tour from.

The Ambush Site. Lt Dick Winters and some of his men were involved in ambushing a group of German soldiers with horse drawn carts. We will visit where the ambush took place but what really happened is certainly different from the HBO mini series but is dramatic, interesting and larger in scale than many believe.

Lt Thomas Meehan’s C47 Crash Site. Visit the monuments that have been erected to commemorate and remember the men that died in this C47 plane crash that was to take the lives of 22 young American Servicemen, including 17 men of Easy Company. Hear the moving letters of their Company Commander to his wife and find out exactly what happened.

Ravenoville/Marmion Farm. We will visit the small village of Ravenoville, situated behind Utah beach. This area was to see many miss-dropped American Paratroopers including some of the Easy Company men. Moving a short distance to Marmion farm you will hear some fantastic stories of leadership, skill and bravery. Also see photos of the Paratroopers taken on the 6th and 7th of June with buildings that have changed little since D-Day.

Audoville La Hubert. Catching up with Lieutenant Dick Winters and his group, this is a great stop that will allow us to understand the battles for the causeways on D-Day. It is also a good location where we can discuss aspects depicted in the mini series including the possible killing of prisoners of war and the compassion men can often feel for their enemies.

Brecourt Manor. Visit the site where Easy Company assaulted the German gun battery position that overlooked and was firing directly onto Utah beach. Hear about the amazing leadership and bravery of Lt Dick Winters and his small group of men as they threw themselves into a well planned and executed attack that would be made world famous by the HBO mini series. (Please note whilst we can view the field that the men attacked, we no longer have access into it).

Ste Marie du Mont. This fantastic small town has hardly changed since the 6th of June 1944. Stand where the men of Easy Company did all those years ago. Hear their stories and see the photos which will bring the invasion back to life.

Coulloville. This, almost, unchanged cluster of farm buildings was to be Colonel Sinks Headquarters (CO, 506th Parachute Infantry Regiment) on the 6th and 7th of June. Hear about the incredible story of Colonel Sinks actions on the morning of the 6th of June and Lt Dick Winters actions that night.

Dead Mans Corner/Purple Heart Lane/Carentan Causeway. The final approach to the town of Carentan. The Germans were going to do everything they could to hold the causeway. If taken by the Americans it would lead to the linking up of Utah and Omaha beach heads. See the funnelling route taken by 101st Airborne Division and hear about the advance that ended in the first American bayonet charge of the Invasion, that would lead to the award of a Medal of Honour.

At a small extra cost you may wish to visit the American Airborne Museum at Ste Mere Eglise.

Carentan. This small, but significant crossroads town would need to be taken to ensure the link up between Omaha and Utah beach heads. It would be the first time the 101st Airborne Division would fight as a cohesive unit and Easy Company would certainly play their part. See the route of Easy Company’s attack and where they were pinned down by heavy fire. Then enter the town seeing the First Aid Post, crossroads and town squares.

Battle of Bloody Gulch. With the approach of the 17th SS Panzer Grenadier Division towards Carentan a decision is made to throw the 101st Airborne Division out into the infamous Normandy Hedgerows to hold at all costs. Hear about the desperate fighting through the accounts of the men that fought there.