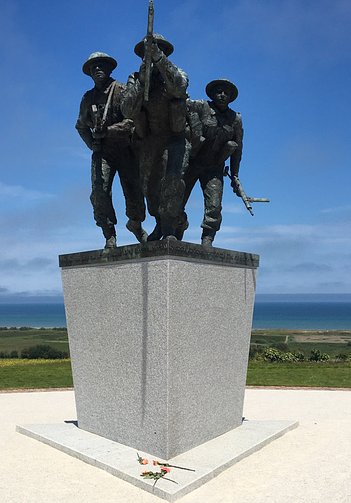 Point du Hoc. One of the boldest assaults of the Second World War. Listen to the stories of the men from the 2nd US Rangers Battalion who scaled up the 100 ft cliffs to assault the strongly defended German strongpoint in an attempt to knock out a powerful gun battery position. Visit the bunkers and see the amazing craters caused by the allied bombing.

Omaha beach, Dog green sector. Here we will visit Dog Green sector of Omaha beach, depicted in the film Saving Private Ryan. The scene of the heaviest casualties on any beach sector, on any beach on D-Day. There is no other stop on this tour where we will better understand the importance of ground in battle. Hear about the young men of the 29th Infantry Division who landed, what they were to suffer and how they finally overcame the German defences.

Omaha beach German resistance nestsWN60 or WN62.
WN German Strongpoint 60. Nowhere on Omaha beach will you get a better understanding of the ground, than visiting this German strongpoint. Overlooking Red Fox Sector, this was the eastern flank of Omaha beach on D-Day and an area that was bitterly contested and would lead to the award of the Medal of Honour. Hear the stories, visit the bunkers and stand in awe at the view.

Omaha Beach, Fox Green Sector.  Now up on the bluff at German resistance nest 62, we can fully understand the ease at which the Germans were able to sustain the battle for as long as they did. Hear about the Omaha Invasion from the German perspective. Visit the last German bunkers to fall to the Americans on D-Day.

Normandy American cemetery. The Normandy American Cemetery. Words cannot do justice to the setting, beauty and significance of this site. The final resting place of 9387 American servicemen and women from the Normandy campaign. Used as a location for filming Saving Private Ryan and overlooking Omaha beach. These amazing grounds of more than 170 acres must surely be a perfect end to any D-Day tour.

Gold Beach sector
Longues Sur Mer Gun Battery. This large German gun battery position has to be one of the most impressive bunker complexes overlooking the Invasion frontage. Large German gun casements with the original artillery pieces still inside. These guns were a major threat to the invasion Armada on the 6th of June and would have to be dealt with quickly.

Arromanches/Mulberry Harbour. Home of the remains of the artificial harbour. See this incredible engineering feat and try to comprehend its design, manufacture and construction. Then try and imagine the 2500 to 3000 servicemen working on, in and around it. An amazing visual stop with an amazing story.

Gold Beach VIctoria Cross action . Visit the beach and be amazed at how the men of the 50th Tyne Tees Division did on D-Day. This was a battle tested Division and many of its men were hardened Veterans. Company Sergeant Major, Stanley Hollis, of the 6th Battalion, the Green Howards, was no exception. The only Victoria Cross recipient for actions on the 6th June. Hear about the man and the heroic acts that were to earn him Britains highest award.

British Normandy memorial. Inaugurated by Prince Charles on the 6th of June 2021, this impressive monument / memorial stands proudly on high ground overlooking Gold beach. It has been long awaited as a point of focus for visitors to the region and commemerates all those, from The British and commonwealth armed forces that made the supreme sacrifice during The Battle of Normandy.