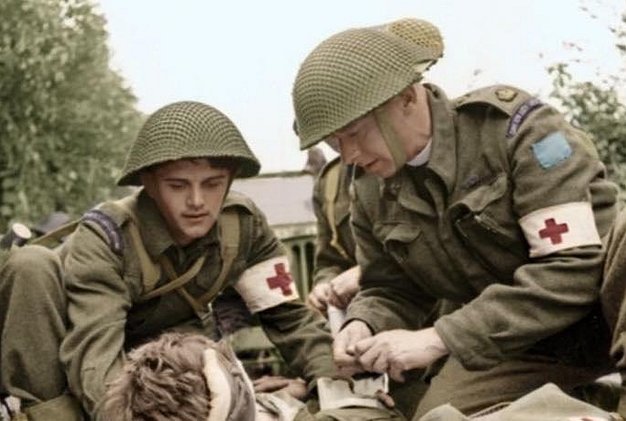 St Aubain Sur Mer/Tallieville. St Abain is the most easterly landing area for the Canadians on D-Day. This was to be assaulted by the North Shore, New Brunswick Regiment, which was certainly going to receive a heavy baptism of fire. See a battle scared German bunker and hear about the incredible layout of German defences and the incredible assault plan that was meant to overcome them. Then hear about the incredible bravery of men, who fought through fog and chaos of war, broke out into open countryside only to hit the German defences of Tallieville.

Berniers Sur Mer. The Queens own Rifles of Canada landing at Berniers Sur Mer were to achieve fame on D-Day by breaking through the German coastal defences and reaching their D-Day objectives. What was the cost and how did they do it? Hear stories of the individuals that fought and died there. Visit Canada House and the train station that features in many D-Day photos. Visit Major General Kellers D-Day headquarters.

Courseulles/Graye Sur Mer. The assault on the town of Courselles was be carried outby the Battalions of the Regina Rifles and The Winnipeg Rifles. Nowhere in the Canadian beach landing frontage were the defences stronger than here and very little went to plan. Listen to the mens stories and understand how they overcame such adversity with hand to hand fighting. Visit German bunkers and an original AVRE (Hobarts Funny Tank).

Beny Sur Mer, Canadian Cemetery. A place of beauty and the final resting place of 2043 Canadian servicemen who were killed during the Normandy fighting. As well as hearing about some of the men buried in the cemetery you will be given time on your own to wander through the graves and remember the fallen.

Anisy/Villons Les Buissons/Hells Corner. Passing through where the Queens own Rifles of Canada have dug in after achieving their D-Day objective, are the North Nova Scotia Highlanders, supported by the Sherbrook Fusiliers, attempting to seize the main Canadian D-Day objective of Carpiquet Airport. We will follow their route inland, stopping at various points to look at the monuments and understand the flow of their advance.

Bloody Buron. This small village was the scene of bitter fighting. Visit the monuments, hear about the battle and visit alone